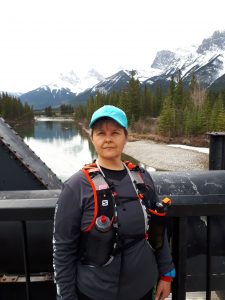 I remember exactly where I was in the lab only a few months after receiving my diploma for Medical Laboratory Technology. Here I was 21 years old with a feeling of emptiness in a job that was supposed to suffice me until I retire. Talk about a feeling of doom. Luckily the yearning for something more also made its guest appearance.

Through a series of job changes, career changes, business ventures, a few location moves, and getting married the yearning for something more, something I am put on this planet to do, to be was still burning and getting stronger. When my brother passed away from pancreatic cancer too soon, not only was a huge void left in my heart, but a burning passion in my soul to discover and live life according to me.

“What does life according to me look like?”
“Where do I start?”

The only definitive answer I had was “hell if I know!!” Anyone relate?

Anyone who knows me will quickly volunteer that I am incredibly stubborn, which is seen by most as an undesirable trait. Not this time. Through a myriad of trials, errors, experiences, failures and victories teamed with my stubbornness and my unwillingness to settle for less I have begun to discover what I’m on this planet for. Note I said the word “begun”. This is a whole new universe that I have discovered and in a lot of ways I have just been born.

The discoveries began in 2013 around a race called Mud Hero into which I was dragged kicking and screaming. Not my thing!! Nope!! Don’t even think about it!! I did learn a couple of monumental things in that race. 1) I didn’t die and 2) I didn’t do that bad. However it was what came out of my mouth even before leaving the parking lot that had my husband and everyone who knew me (including myself) just what REALLY was in that mud and whether I would need counseling for this or not.

Consider this, Canadian Death Race is a 125 kilometer race that includes 17,000 feet of elevation change, 3 mountain summits, a river crossing that is run in 24 hours and I want to be part of it??? I surely have lost my mind somewhere under a Mud Hero obstacle. The so-called saving factor is that I wanted to be part of a team, not solo, because who is silly enough to do that? Not me, that’s for sure!!

So to humor the Universe, I asked a friend about teaming in Death Race. My friend said yes. Well that didn’t go as planned. Okay, there’s 2 of us and a team consists of 5, so a long way to go. Again to humor the Universe I asked another friend if he was a runner and mumbled something about a Death Race team. My friend’s response that he isn’t a runner, but he and his girlfriend are looking for a team for Death Race. Excuse me!!?? What just happened?? There’s now 4 on our team and within a blink of an eye, there was the 5th. Oh Good Lord, what am I getting into?? The truth was something beyond my wildest imagination.

Okay, now that I’m in this silly race, I have to train or something for it to make sure I finish my leg and get the coin. After all, it’s all about the coin. One catch:

“I’m NOT a runner, never have been, never will be.”

That’s fine, because considering that my leg is the last, is in the dark, not planning on running. Hah!! I shall power-walk!! Eureka!! Not having a clue as to whether I can finish 24 kilometers, I know one thing, I am incredibly stubborn and I’m going to give it my best.

I started power-walking at the end of April 2014 to prepare for Death Race on the first weekend of August. First it was 3 or 4 kilometer walks and then after one of those walks I heard “go longer”. So to humor that voice, I went out again and this time it was 12 kilometers. After that I did another 16 kilometer walk, and another and then a 25 kilometer walk. Then came a discovery: I had a knack, it was easy, and I liked it. In fact, I remember the exact place on my training power-walk when the lightning bolt realization hit:

“I am an endurance athlete.”

Then I stopped dead in my tracks. A what?? Very funny O Divine Creator. Some sense of humor you have. Have you been paying attention to my life the last 50 or so years? Have you not seen that I am not a runner, not built like a runner, and don’t like running? My brother was the athlete! I’m something else, a lost artist or something.

The answer came back again that I am indeed an endurance athlete. How can I be? I have the stocky, “pass me that tractor” genetics, built for strength. I have legs like a Clydesdale for heaven’s sake! It appears that I’m not the only stubborn one in this conversation and as wacky as the idea seems, there’s something that feels right about it. Trust.

Canadian Death Race 2014 came and my team and I were bundles of nerves. It was the hottest day ever for that race. Teams and soloists were dropping like flies and my team was still alive and well. Then the moment of truth came: it was my turn to go. Aacckk!!! Gulp!! Off I went into the darkness and up a hill, a very long and steep hill. Right there, somewhere up that hill was my “come to Jesus” moment.

“My team had done their jobs, it’s all up to me. It’s up to me as to whether they get their coins or not.”

Humbling little snippet as well as the next thought I had:

“My team has already peeled it out of the parking lot, so I have to walk anyway. Might as well go forward.”

It ended up that very thought was true. As soon as I left, rubber was laid to get out of the parking lot. What’s more important is that I kept going forward, one foot in front of the other, and having a great time. A few hours later I crossed that finish line, victories and coins for us all. What I didn’t expect was the profound impact that race had on me. I also didn’t expect that I would be left with an insatiable hunger for more. I closed out 2014 power-walking a 10K and a half marathon. Still a power-walker, not a runner.

In January 2015, I started to throw in a little trotting in with my power-walking. I saw Dag, the Death Race icon, trot and if he can do it, so can I. In May, 5 months later, I completed my first 50 kilometer Trail Ultramarathon. That year I completed 3 half marathons, returned to Canadian Death Race with 3 of my team and a new front end, a 21 kilometer relay leg at Iron Horse Ultra, and attempted a 50 Mile Ultramarathon that went 46 kilometers on an injured knee before I pulled the pin. I was devastated, but not giving up.

Something happened after Death Race that I didn’t count on nor in a million years would ever imagine. My new leg 2 guy, Colin, and I ended up planning a duo team for 2016 with one condition: he coaches me and plans my training. Okay, why not. Then the unforeseen happens: we both enter Death Race, but not as a team, but solo together. Who does that?? Who runs that far?? On purpose!!! Apparently both of us are. Not sure whether to thank or choke Colin. Time will tell.

2016 was pivotal as I have something I’ve never had before, a coach. Up until now it was by “feel”. Did not too bad, but I want to be better. My accomplished list includes 5 half marathons (including one in Hawaii), Blackfoot Ultra 50K, and Lost Soul 54K (love this race). However it was my unfinished races, Canadian Death Race 125 kilometer solo attempt, and River’s Edge Ultra 50 Mile attempt, where I learned the most. I learned how far I’ve come in a short period of time, what I am now, and where I want to go. Plus I had a hell of a good time.

“There’s nothing like standing on top of the second mountain that I’ve climbed in a race, looking around, and thinking that I’m damned awesome and that THIS is what it’s all about.”

I found it!! I found my fountain of youth, my purpose in life, my Utopia!! In the middle of running a nut-busting race, I was the happiest camper on the planet. I wanted only to run down that mountain, tell my coach, and start training for next year. But, hold on a second, I first had a race leg and a race season to finish. One more thing:

“I am an endurance athlete, an ultra runner!!! Who else does this batshit crazy stuff and loves it??”

There, I said it! I have come to terms that I am indeed an endurance athlete. I don’t look like the “typical” runner, but I am indeed a runner.  My body type is one of being built for strength and not necessarily for speed. Race cutoffs are great, but I want to finish not worrying about them. Finishing mid pack would be nice.

However to get where I want to go and do what I want to do, I need to incorporate help from people who know more that what I do. This means getting guidance from a running coach, reading all I can about running and how to properly fuel one’s self for both training and racing. In regards to diet I’ve tried many things with pretty much the same result:

“Every time I try something to lean, the scale looks at me and yawns.”

I can run a 50+ kilometer race, burn a few thousand calories and it’s status quo. In a field of gazelles, deer, and jackrabbits, sometimes being a Clydesdale is hard, and frankly, lonely. That said, I can only be the best me I can be and I need to find out what works for me, what races I like to run versus what everyone else is doing. Sometimes it takes courage and honestly to find the answers, but one thing is for certain:

“It’s a journey so come along and see where I go, what I do, and what I find out along the way!!”

A Trail Runners Journey to 100 Miles